GREAT plugin … as good as my setting on the eventide eclipse

A plugin you’ll turn to again and again.

Once you try it, you probably won’t be able to live without it

Usually, I wait to say things like this … but Stereo Savage is *it* when it comes to stereo width creation, subtraction, management and control. 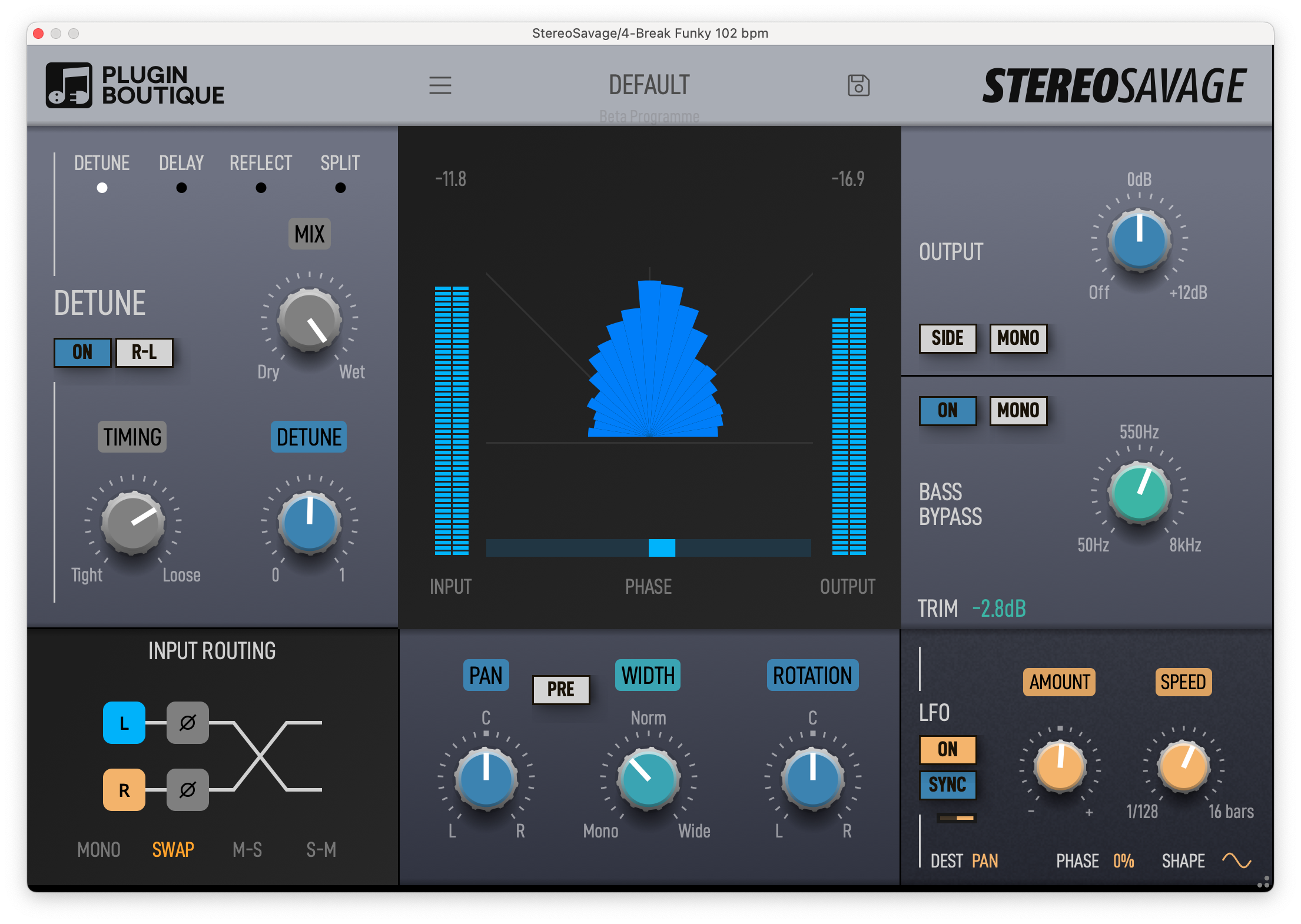 Achieve the stunning stereo your mix deserves. StereoSavage provides an innovative stereo toolbox, combining tried and tested studio techniques with emulations of modern and classic tools that will bring your mix to life.

Generate stereo from mono with the: VOX, DELAY and EXPAND programs. Place sounds precisely in the stereo field with the adjustment tools: WIDTH, PAN and ROTATION. Create movement and chorus-like effects with the LFO and retain a solid low end with the adjustable BASS BYPASS.

StereoSavage includes all of these features in a single plugin for the first time, offering the flexibility to enhance your track with dramatic effects, or add the perfect subtle finishing touches.

Most of these examples start with an untreated example showing the original sounds before stereo savage was applied. The only difference between the untreated sounds and the treated sounds is the addition of StereoSavage.

This is the classic application of the VOX setting. Here you can hear it on a bare lead vocal but it’s equally at home on backing vocal parts.

Pan only the tops

The BASS BYPASS controls are used to maintain a solid central bass sound while the top of the sound is flown around from left to right at the end of each bar using the LFO. The LFO has a nice shape for this which stays central for the first half of the bar and then does a hard pan in the second half.

Here’s a typical effect part for adding some audio drama.

On effects sounds we can be aggressive with the effects – even at the expense of some mono compatibility.

In this demo you can hear the original sound followed by a version with StereoSavage applied. Three instances of StereoSavage were used, and the width control is automated for the reverse cymbal, and the LFO amount automated on the final sound.

The PRE button was used to move the panning before the widening so we can get a more extreme pan effect.

A little VOX effect is used to make the bass wider.

Here the VOX effect is used to add a double tracked effect to a rhythm guitar part.

The EXPAND effect used on a bass guitar. The wet dry is set around 10-20% and the warm button is off. Stereo width expansion is left at 100% because the EXPAND setting already introduces some out of phase components and we don’t want to over do it!

The rhythm guitar is given space without excessive reverb using the EXPAND effect. The stereo width expansion is kept at 1.0 for this effect to work at its best.

Here the LFO is automating the width control.

Panning the top end left with the Haas effect

We do something very simple here with the DELAY effect. The level in each channel remains the same, but the sound appears to originate from the left channel. This has similarities with panning.

It has advantages and disadvantages. The main disadvantage is that the effect isn’t 100% mono compatible. If you sum the channel to mono it’ll generate a comb filtering effect. It’s unlikely that your music will be summed to mono except in noisy bars, and on subwoofer systems. The BASS BYPASS control can be used to avoid inadvertently creating problems on the subwoofer.

The advantages are that: it moves the sound from the centre but retains some definite weight in the other channel, making it an option for spatially separating say a guitar and a central vocal.

It’s also great for important percussion on club mixes – the chance of comb filtering being a problem is far less on these types of sounds – and because the volume doesn’t change in either speaker, clubbers standing next to the left or right speaker stacks will still have the part nice and loud.

This is a before and after showing the rotation effect in use on a natural sounding drum recording. The drum loop is a single WAV file. The rotation control moves the sounds that were in the centre to the right, leaving the room sounds and the cymbal on the left where they were.

This is very different from using a normal PAN control.

This before and after shows how subtle stereo processing on all the sounds can add some fabulous shizzle.

In this case I’ve used the delay processing on just the high bass frequencies (using bass-bypass). I’ve also added some more subtle processing to the hi-hat and the snare. The hi-hat has the LFO amount automated so we get a bit of movement just at the end of every other bar.

Up In The Sky BVs

These show stereo processing applied to various elements in the intro from a country rock track. You can hear the additional space and width that StereoSavage creates.

(Samples kindly provided by South of the City – see www.facebook.com/southofthecitymusic)

Up In the Sky intro

These show stereo processing applied to various elements in the intro from a country rock track. You can hear the additional space and width that StereoSavage creates.

(Samples kindly provided by South of the City – see www.facebook.com/southofthecitymusic)

There’s a single instance of StereoSavage all over this string part for some movement. But the real treat is right on the end of the last note. Here we throw the pan into PRE mode so that we can get the width enhancement on top of our autopanner, and the AMOUNT control is automated on that last bar introducing the tremolo.

If you’re listening on speakers this should sound like the strings are coming from way outside of the normal stereo image. It sounds like it’s tickling my eardrums in the studio here.

Vocals are one of the best uses of the VOX effect. Typically you’d apply this to a mono vocal part. However in this example we take an already rich stereo vocal harmony part and use VOX to make it even more lush. This also uses a bit of the WIDTH control to bring things slightly, but not troublingly, outside the normal stereo image.